The Brampton Cenotaph and its History

One of the most moving experiences in Brampton is the annual Remembrance Day gathering of the citizenry at its cenotaph. In hundreds of ceremonies like it across the country, we Canadians throng to hear prayers, tributes, hymns and anthems and to witness the laying of wreaths. We stand for an hour or more, on days that are sometimes bitterly cold and sometimes marked by pelting rain, knowing that in doing so we are enduring barely a bit of the discomfort experienced by those we came to honour.

In the years immediately after the armistice, it was not clear that a cenotaph would ever be constructed.

It was not as though there were no other memorials to the fallen. On the cessation of the hostilities in 1918, a tree was planted in Gage Park to serve that purpose. More enduring remembrances existed in plaques throughout the town. In the Brampton High School, a bronze plaque had been installed listing nineteen former pupils who were among the fallen. Similar plaques and scrolls honouring fallen men within their congregations were located in Brampton churches. In May 1922, a cross was mounted in the Brampton cemetery by the Great War Veterans Association of Brampton.

A memorial hall of sorts existed in the two-story building constructed by that same association on land acquired in May 1919. The building included assembly rooms in which dances could be held, for the enjoyment of veterans and their appreciative countrymen. Situated on the south side of Queen Street, just west of George Street, the building would later become the home of the Odd Fellows– a fraternal order, still operating in Brampton and dedicated to “endeavours to enlighten the mind without taking privilege.”

A more enduring legacy to the fallen was the new hospital. The proposal to build a hospital in Brampton was not new. The Women’s Institute of Peel had been raising funds for that purpose since 1911. Their efforts were put into abeyance during the war while they raised funds for field ambulances and other necessitates to support the Peel battalions overseas. But with the armistice, the women turned their efforts once again to the hospital, which they proposed, would treat all veterans and widows of the fallen at no cost. In 1925, Peel Memorial Hospital, located in a large house once owned by John Elliott, admitted its first patients. Few Bramptonians were opposed to the construction and naming of the hospital, but some did not feel it was sufficient as a war memorial.

Certainly the construction of a cenotaph was always supported by some Bramptonians. Over the years, a number of reports on a cenotaph were commissioned. They likely dealt with such matters as location, costs, oversight and financial responsibility.

By 1927, a Memorial Committee had been struck to take charge of the efforts. Led by the Dale Estate manager and former mayor T. W. Duggan, the committee was eventually comprised of seventeen members. Other members included Lt. Col. R.V. Conover (whose letters formed much of our 2021 Remembrance Day Newsletter), Mayor F. W. Wegenast, other members of the town council, representatives of the Peel and Dufferin Regiment and the Brampton branch of the Canadian Legion and citizens.

You may not be surprised to read that the Brampton town council was divided in its support for the Memorial Committee. (The Brampton municipal council is often divided.) In its July 21, 1927 edition, The Conservator reported on a lively council debate that had occurred three days earlier. The most vocal councillor on the subject of the memorial was one George Akehurst. Akehurst expressed the view that the recently opened hospital was a sufficient and appropriate memorial to the fallen. However, if the people of the town “wanted a stone erected as a special memorial” he was willing to go along with it.

Nonetheless it was Akehurst’s view that if the monument could not be erected in the remaining seven months of that year (something that was clearly impossible), then the funds collected from the ratepayers for the purpose should be returned to them. He advocated for greater citizen involvement in the selection of the design. Perhaps, he posited, drawings could be projected for some time on slides at the Capitol Theatre. Akehurst complained about an insufficiency of meetings of the Memorial Committee and a deficiency in reports from the committee to the town council, even though he was himself a member of the committee.

Councillor Akehurst was not the only critic. Although it appears that an architect had by that point been retained to prepare a design, Councillor Warr wondered whether a design competition could not be “gotten up” among High School pupils. Some offence was taken to the fact that certain named individuals (Messrs. R. W. Hall, Jr. and W. H. Riehl) who had designed Brampton buildings had not been requested to offer a design. The Mayor suggested, likely in jest, that he too should have been asked to submit drawings.

After questioning the authority of the Memorial Committee, the town council passed a motion instructing the committee to consider the design, location and character of the memorial, to call for plans for the same and to consider and submit the same to the council.

Indeed by the time of that July 1927 council meeting an architect had been selected. Mackenzie Waters was not a person known to most Bramptonians, but he was known to the committee. A military man, he served with distinction in WW1 achieving the rank of Acting Captain and receiving the military cross. Like many Brampton servicemen, Waters fought in the Battle of Amiens, in August 1918. After incurring shrapnel wounds to the head in the later Battle of the Canal du Nord, he was invalided to England before retuning to Toronto to complete his architecture studies at UofT. He would have a successful career as an architect, mostly in Toronto, before serving again in World War II.

The monument Waters designed would take the form of a pylon with Roman battlements and classic decorations including a Sword of Sacrifice and a Wreath of Victory. It was to be constructed of light grey granite “of even texture and grain” and to stand twenty-five feet in height. Etched into the column would be the names of the battles in which Canadians “won immortal fame,” a maple leaf and the crest of the town. 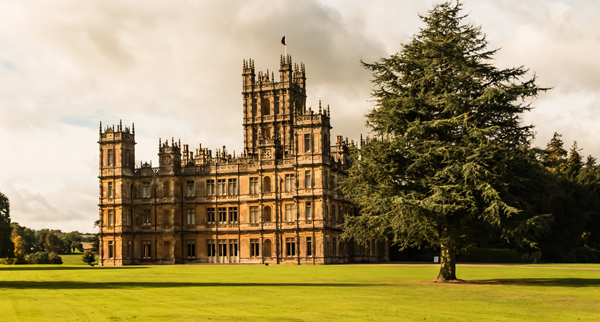 Undoubtedly there was some controversy over the years as to where the cenotaph, if it was to be built, should be located. Viewers of Downton Abbey (of which you will note I make frequent references), will recall the controversy regarding the location of the war memorial to be constructed under the direction of the committee led by the family butler, Mr. Carson. Should it be placed in the tranquil countryside (where in the quiet of the fields one could solemnly reflect on those who were lost) or should it be located in the centre of the bustling village (where it and the memories of the fallen would be incorporated into the daily lives of the villagers)?

By 1927 it was clear that the Brampton cenotaph, if constructed, would be located in the “Park Annex” at the north west corner of Main and what was then known as “South” Wellington Street. The Park Annex lands, across the road from Gage Park, had been acquired by the town in 1922. The motion of the town council seeking information from the committee on the location of the memorial, presumably related to its precise location on those lands, rather than its general location.

With the design and the land in hand, the Memorial Committee commenced a tender process for the construction of the cenotaph. The McCallum Granite Company Limited of Kingston, Ontario was selected. In mid-September, a draft construction contract was produced by Brampton lawyer R. Lent who practised with A. Grenville Davis, the father of our former premier.

A short period of negotiation ensued. Correspondence between the parties and their lawyers focused on usual matters: the making of progress payments, bonding for maintenance and repairs, etc. A more unique matter in controversy pertained to what exactly could be accomplished between October 3, 1927 (the date of the contract) and November 11 of that year. The contractor took the view that the specific conditions of the site required a season or two to pass before the construction could continue beyond the foundation level. Those conditions were, of course, those brought on by the location of the cenotaph in such proximity to the not-yet-diverted Etobicoke Creek.

Indeed, the greatest detail in the design specifications of the monument pertained to its foundation. The type and amount of stone and concrete were set out. “Plums or rocks” were to be placed in the concrete to “a man’s size” which presumably, is another way of saying “of about six feet”.

In the end it was agreed that only the foundation would be constructed before November 11, 1927

The total cost of the construction was $9,000, an amount that constituted “two mills” (think of municipal tax mill rates) being the amount that had been collected from the taxpayers and allocated by council for the purpose.

The ongoing role of the committee was entrenched in the contract, including with respect to the determination of the “permanent” site of the memorial on the Park Annex lands, which was to be staked out by the Town Engineer, under the instructions of the War Memorial Committee.

Unveiling of the cenotaph

Construction of the cenotaph was completed in lightening speed by today’s standards—less than a year separating the execution of the construction contract on October 3, 1927 and the monument’s unveiling on July 4, 1928.

On a ‘broiling” Wednesday afternoon, over 4,000 people stood for a two hour ceremony which featured an inspection of the Guard of Honour, a number of hymns (including O God our Help in Ages Past), the singing of the national anthem and God Save the King, prayers (including one for the Royal family and all in authority), remarks, the placement of wreaths, the reading of the honour roll (a list of the Brampton fallen), the playing of The Last Post and Reveille (performed by the Peel & Dufferin Regimental band); and a two minute period of silence.

The remarks of Reverend Capt. Bruce Hunter, T. W. Duggan, Mayor Wegenast and His Excellency Viscount Willingdon, Canada’s Governor General are reported in great detail in the July 5, 1928 edition of The Conservator. Some of those remarks describe a Brampton very different from the Brampton of today—indeed the many references to Brampton’s “Englishness” may not have been entirely accurate even then. The confidence espoused by some remarks to the abilities of the League of Nations, proved to be unfounded. But other prayers and fervent desires for peace, are those we would equally espouse today.

The highlight of the occasion was the monument’s unveiling. After inspecting the Guard of Honour and witnessing the opening proceedings, Lord Willingdon moved toward the cenotaph which had to that time been covered in the “enshrouding folds of a huge Union Jack”. As reported in The Conservator, His Excellency pulled gently on the cord securing “the glorious flag for which the men of Brampton had so willingly fought and died “ revealing inch by inch “the lovely slender column.”

Beginning with its ground level wide base, rising initially through ever smaller granite blocks and culminating in a column bearing the Wreath of Victory, the memorial symbolizes a gradual rise from a level of inaction, to one of service, sacrifice and great achievement. Among the solemn words etched in its stone are the following made with reference to the fallen: “These thought not of self but gave their lives for us.“ 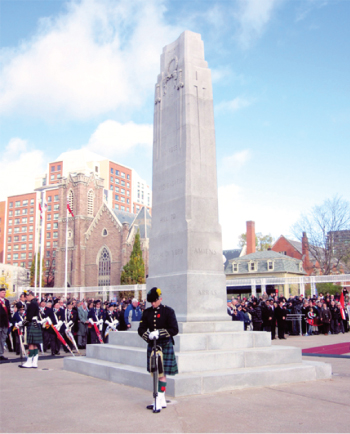 With special thanks to: