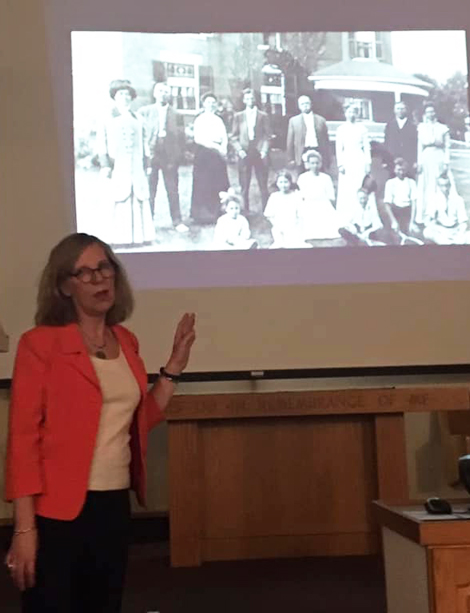 Listening to Lynne read at our book club meeting made me feel like I was back in the time and place of the book!  An excellent discussion followed, facilitated by Lynne.  It was such an enjoyable evening.

Lynne Golding has great presentation skills. She is clear, articulate, passionate about her subject and welcomes questions and  feedback.   I marked students’ presentations over the years and I  would definitely give her an A +.

We invited Lynne to share her thoughts to a large group of women lawyers about how one can pursue a passion for writing while also being a full time legal professional.  Throughout her presentation, the group was impressed with her dedication and determination and loved her reading from her own writing.  She not only amazed the group, she  left us all determined  to find our own passion!

Lynne presented her book, “Beneath the Alders” here in our library and the talk was both engaging and entertaining. The audience was drawn in and could envision themselves as the characters, living in the time period. I would highly recommend attending a talk by Lynne Golding!

Lynne is a frequent speaker on the law, politics, women in society and the health sector. In writing The Innocent and the Beneath The Alders series, Lynne has gained insight into what life was like in Brampton and Canada in the early decades of the 20th Century.

Lynne is available to speak on a variety of topics including:

Writing Beneath the Alders and the Innocent: the process and the inspiration; managing the practice of law, the raising of a family, and the writing of a novel.

Politics, sports, dentistry, public health and industry: their practice in the early 20th century; based on research compiled for the writing of Beneath the Alders and The Innocent.

An interesting life: Jessie Roberts; a woman born in 1903, who came to adulthood at the end of WWI; at a time when there were an insufficient number of men to marry; who wanted to be a dentist but who was required to become a teacher; who became a scientist and an advocate for legislative change; a dean at the University of Toronto and a member of the Royal Canadian Air Force in WWII.

Brampton, a small town that became a big city: Why this community continued to thrive while others did not; based on research compiled for the writing of Beneath the Alders and The Innocent.

Religion in the early 20th century – the evolution of the churches in Brampton; the Primitive Methodists that settled Brampton and made it their national headquarters; the life that evolved around the church in the late nineteenth - early twentieth century. Based on research compiled for the writing of Beneath the Alders and the Innocent.