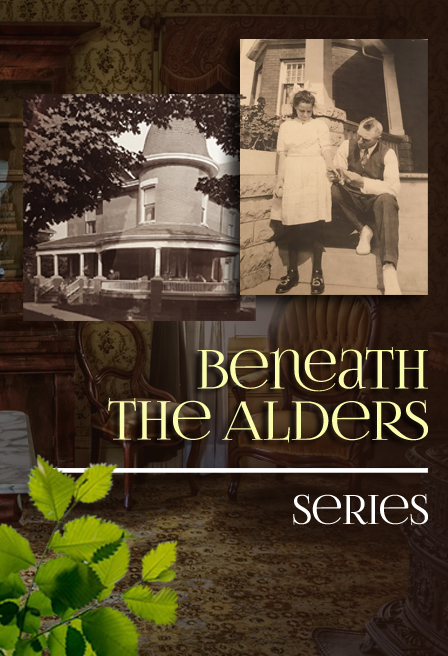 “This series is a journey back in time to what was needed for building a future that cares for many thousands for decades to come. Through a fascinating family, Lynne Golding’s novels lead us into the past in a whimsical way that can’t help but connect to our own ambitions.”

Beneath the Alders Series

This is the story of Jessie Stephens and her family; the inquisitive girl who becomes a bright modern woman; the grandfather who built the town’s finest churches and homes; the brother who in the space of a year vied for the Mann Cup in Vancouver with the Brampton Excelsiors lacrosse team and for military victory in Greece with the Canadian Expeditionary Force; a zany aunt who chose to live as a single woman in Toronto rather than adhere to the dictates of Brampton society; a sister whose only chance for love was put asunder by the bigotry of the time; a strict father who infamously lost the stature he so long desired; and a devoted mother.

Beneath the Alders is comprised of three books:

In the year 1907, all of Brampton is present at the sod-turning ceremony for the Carnegie Library. At the end of the event, the crowd rises as one to walk to the Presbyterian Church for a consecration service… Everyone except Jessie Stephens and her family. Her father will not allow them to enter the Presbyterian Church.

No one will tell young Jessie the reason but she learns that it has something to do with her grandfather Jesse Brady, who built it. As she seeks to solve that mystery, over many years Jessie slowly begins to learn the history of her family and the town in which she lives. Amid local politics, a flooding creek, outbreaks of Scarlet Fever, lacrosse matches, the temperance movement, local schools and churches, her tales of everyday life in small town Ontario combine to craft a vivid portrait of a life and a family that are, upon closer inspection, anything but ordinary.

The Beleaguered 1914 –1918  Now available online and in bookstores

The peace and tranquility Jessie felt at the end of the Innocent is put asunder. The bigotry of the time, ends one familial relationship; World War I ends others. Jessie’s quest to understand her grandfather’s history and the reason their family cannot enter the Presbyterian Church, is put aside as she, her family and her town come to terms with life during the war: its effect on their routines, how they eat; how they dress; how they treat those who have enlisted and those who have not. As their industries, churches, associations and lives are transformed, they discover new fears and new joys.

The Mending 1918-1931  Now available online and in bookstores

The war is over. Jessie, her family and her town seek to return to life as it was before the war, a goal they soon realize cannot be realized. They struggle to adequately honour the dead and to incorporate among their midst the physically and mentally wounded. Jessie graduates from high school and eventually university, all in a time when girls and women are bolder; and the boys and men less easily satisfied. Jessie commences her career and falls in love. Eventually, she leaves Brampton but not before she learns the reason why she and her family have been banned from entering the Presbyterian Church. Defying that edict, she comes to terms with other family secrets recently revealed to her.