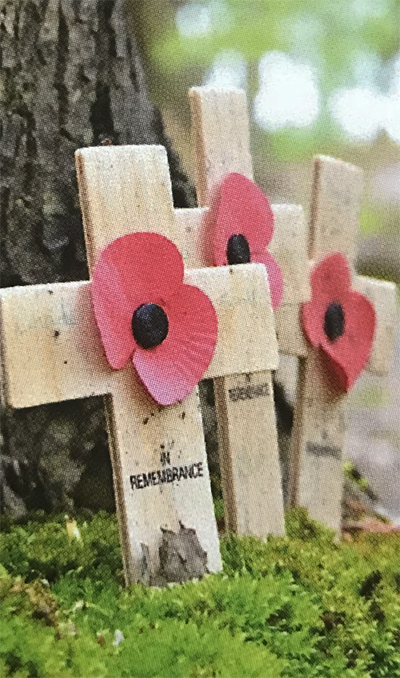 The War to End All Wars ended in 1918, on the eleventh day of the eleventh month. The hostilities that had claimed and maimed millions; that had challenged the natural order of life, marriage, and death for a generation; and that had drained the coffers of the combatants, ended at the eleventh hour of that day. The proclamation of that peace reverberated across the earth. It was proclaimed in Brampton in the early morning hours.

“Dot! Dot! Dot! Dot!” I sat up, confused, wondering where the sound came from and what it signalled. It awoke Grandpa and Mother too. They stood in front of the open door of my bedroom, the halfway point between their two rooms.

“What is that noise?” I asked groggily.

“We aren’t sure,” Grandpa said, coming into my room. He went to the window next to my bed and lifted the sash. The storm window had been reinstalled the previous month. He lifted the small board at its base, exposing three large, circular vents to the outside.

“It’s coming from the north,” Grandpa said, looking over the rooftops toward Queen Street. “From the Dale Estate, I expect.” Then, looking down at the street below, he exclaimed, “Ladies, get your coats and boots. That whistle is sounding peace!”

“Is it really peace this time?” I asked him. A false report of the ceasefire had circulated four days earlier. While it led to a joyous afternoon celebration, we were crestfallen that evening to find that our celebration was in vain.

“We’ll have to go see,” he answered. “And I wouldn’t bother getting changed. It doesn’t look like anyone else has.”

I threw my legs over the side of the bed and joined him at the window. Our neighbours were pouring out of their homes, their winter coats over their nightgowns, their pajama bottoms tucked inside their boots.

Arriving at the Four Corners area a few minutes later, there was no doubt that the peace for which we had all long prayed had finally been realized. A bonfire was burning in the middle of the intersection. Dozens gathered around it in an effort to stay warm and to obtain sufficient light to read the one-page pink extra the Conservator staff were distributing — a broadsheet citing the earlier announcement of the US State Department and the signing of the armistice earlier that morning.

The shrill Dale horn that first awakened us soon brought about a chorus of other horns and whistles as the other Brampton factories joined in the celebration. With the arrival of dawn, most of us returned home, filled our stomachs with hot porridge and tea, changed into more suitable attire, and returned to the Four Corners with a noisemaker appropriate for the occasion — often a spoon and the lid to the pot just used to cook our oatmeal.

Wherever the crowd moved, oration occurred. Mr. Charters, our Member of Parliament, and Mr. Bull, our mayor, were the font of many of those speeches. But ordinary people — the people who had lost one, two, or even three family members to the Great War — they spoke too and with heartfelt eloquence. They spoke by that early-morning bonfire and later up the street near the Royal Hotel; later still in the Concert Hall; and, finally, in Gage Park, where a tree was planted as a tribute to the Brampton men who made the supreme sacrifice. They spoke of the imperative of war and the glory of peace; of what it meant to lose a loved one in the great cause; of what had been achieved. We applauded and banged our noisemakers.

When we were not listening solemnly to a bugler’s rendition of the “Last Post,” we were lustily singing “God Save the King,” “Oh God Our Help in Ages Past,” “Onward Christian Soldiers,” and our comparatively new national anthem. We sang until we were hoarse.

Father, Aunt Lil, and Ina all came to Brampton from Toronto, arriving at various points in the day. We hugged each other, as we hugged friends and strangers alike — often several times throughout the celebrations. We thanked God that it was over; that the killing had stopped; that Germany had been defeated; that our Allies could live in peace; that our lives could return to normal.