The Evolution of the Brampton High School:
A comparison of School Life in the 1890s and 1920s

My answer to that question is mostly drawn from these sources:

- The Gazette – a Brampton High School (BHS) newspaper aimed at making the school, which “is regarded as a credit to the county” better known. Sold through subscriptions to students, alumni and the community, it was published monthly by the BHS Literary Society for 25 cents per year. I have two and a-quarter issues from its first (and possibly only) year of production: Nos. 2 (December 1890), 4 (February 1891) and 6 (April 1891).

- Brampton’s 100th Anniversary 1873-1973, the gold covered centenary book published by the Town of Brampton and its Centennial Committee and in particular an article within it on the History of Education by Hilda Kirkwood. 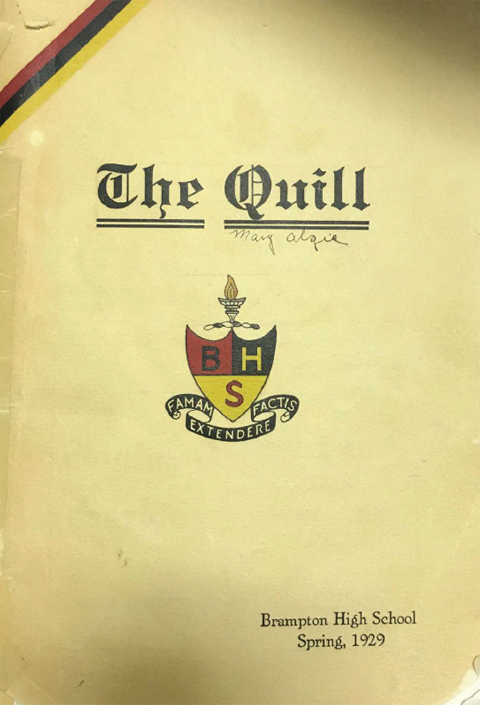 In the early days, Brampton’s high school students were taught within three rooms on the second floor of the Central School on Alexander Street, originally a two-storey, six-sided structure built on land acquired in 1855.

But in 1878, at a cost of $12,000, a separate high school was built on the northeast corner of Church and Centre Streets. Students from Brampton and beyond attended class in the two-storey building with its tall arched windows and big square central tower.

In January 1917, the old school succumbed to a fire. For the next year and a half, high school classes were held in the county courthouse. Finally, in September 1918, students were admitted to the newly built three-storey school located on the same lot but just to the west of its predecessor.

Alas, that new school did not stand long before it was deemed too small for the growing community. In 1926, an addition was constructed containing, among other rooms, a larger assembly room, a new gymnasium and a commercial room. The school did not have a “bench room” or cafeteria in which students from out of town could enjoy their lunch—a deficiency noted by the editors of the Quill.

Throughout both periods, Brampton was known for providing a classical education. Classics, mathematics, English, history, science and modern languages were taught in both periods. Although some of these courses may seem to be a bit high-brow, in the 1890s BHS actually prided itself on providing a practical education, one that would allow students to enter commercial life with “every facility offered for obtaining a business education.” The classical education would prepare students for examinations in law and medicine, dentistry and pharmacy, civil service and the Royal Military College, for arts programs (i.e. a bachelor of arts) and to obtain teachers’ certificates. The only subject advertised that we would consider to be truly practical was the teaching of short hand, referred to as phonography.

By 1919, the curriculum also included art and physical culture (or gym). By 1926, the school had a commercial room and a typing room, the latter of which was equipped with over a dozen typewriters.

Size and Composition of Matriculating Classes

The 1891 picture is useful though as it allows us to compare the size and composition of the BHS matriculating class at various times. The six students who matriculated in 1891 (five male, one female) compares to the eight who appear to be the comparable group in the class of 1918. This was a year in which the number of male grads was surely reduced by the enlistment activities of the war. Seven are referred to as “Entrance to Faculty” (four men and three women) and one as an honor matriculation (Wilmott Campbell, classics and mathematics).

By 1924, the method of categorizing graduates had changed. The commencement program listed only those receiving diplomas with no mention of examination results or the ability to proceed to other programs. Those listed fall into two categories: 1923, which sets out the names of nineteen students, at least fourteen of whom are female and 1924, which sets out the names of forty-nine students at least twenty-two of whom are female. Although no explanation is provided, I assume that the 1923 and 1924 designations correlate to the completion of studies by the students in either December 1923 or June 1924.

In both the 1890s and the 1920s, one could not graduate or matriculate without having passed provincial examinations. One sought not A’s or maybe B’s but rather to graduate with a 1st Class or maybe a 2nd Class. The studious would not desire a mere “pass”. Of course, some fell into the final category: fail.

The post war egalitarian systems that eliminated class distinctions on passenger ships (see this article) appears to have swept the education system as well. The convocation program for the class of 1918, in reference to the provincial examinations, designates among those who passed, only those who were distinguished by obtaining “honours”.

A Phalanx of Teachers

In its December 1890 issue, the Gazette reports on news of recent graduates. Of the eleven students described, one was reported as being at Toronto University (Miss Katie Fleming) and one at Toronto Medical School (James H. Austin). Three men and five women were reported as “wielding the rod”-- or teaching—one of whom may have been in the matriculating class but chose to defer university admission. J. Lawson, “a man of excellent mathematical ability” was said to have become engaged in farming.

Many graduates taught for a time and then returned to high school to pursue the education that would allow them to teach a higher level of school—a matter dependent on whether one held a first class, second class or third class teaching certificate or a university education. (See the Ask Colleen article here for more on the certificate distinctions.) Appealing to those who wished to teach higher level classes, the Gazette urged enrolment in BHS in 1890 stating that…

Third class teachers intending to read for a second, and second reading for a first, will consult their interests by coming to Brampton.

The program celebrating the career of W. J. Fenton, Brampton High School’s principal between 1892 and 1927, describes his academic journey, which is said to be typical for the time:

… Coming to Brampton to attend high school, Mr. Fenton went to High School in the old Central building… As soon as he acquired his teacher’s certificate, he followed the general example of the day and taught school for a time. At SS No. 6, better known as the Home School, he wielded the birch and then returned to Brampton High School to take his honour matriculation under the late Alexander Murray. This took up a year and a half of his time and his next step was to attend Toronto University graduating in the honour course in Classics in 1889.

You will have noticed the odd practice both in the 1890s and the 1920s as referring to teachers by the corporal punishment they had the freedom to inflict.

The commencement program for the class of 1918 lists seventeen “lower school” students who successfully wrote examinations allowing their admission to normal school (or teachers college). Among them was my Aunt Jessie who was reported as being one of three students passing with honours. Despite the distinction, Jessie continued her high school studies, deferring her attendance at normal school until after she had received both a bachelor’s degree and master’s degree.

For all the growth in the BHS student population in the late 1920s, the number of faculty members changed very little. There were in 1890 five teachers, all male, two of whom had university degrees.

The number of faculty members in 1918 remained at five but as evidence of the change in society resulting from the Great War, of the four staff members listed in addition to Principal Fenton, two were male and two were female.

With rising enrolment, by 1929, the number of teachers on the faculty had risen to nine, eight of whom were female including one married woman. (Possibly she was a widow.)

Although women held no positions within the faculty of BHS in 1890, women held leadership positions in school activities. The officers of the 1890 BHS Literary Society included an equal number of male and female student members.

The 1929 editorial staff of the Quill contained as many female as male students within all of its ranks. The picture below shows quite a modern looking team, one that could easily be confused with a similar assemblage over the next several decades.

Titles of Teachers and Students

You will see that I have been able to be quite definitive about the number of male and female students and teachers in some years but not in others. I was aided in these tabulations in some cases by the practice of the time of ascribing the title “Miss” to the full names of the female students (e.g. Miss Jessie Small). Often male students were deprived of not only a title but their given names as well. Thus in the 1890s, mere initials distinguished J.C. Kirkwood from W. Kirkwood.

One must be happy for the young women of the 1890s and 1920s whose full names as students were recorded for posterity. References to those women in publications after they entered the matrimonial state were devoid of any portion of their given names. As an example, Miss Frances Fenton, referred to as such in the cast of “The Twelve Pound Look” (one aspect of the entertainment at the 1919 convocation ceremony) was referred to in the Brampton Centenary book as Mrs. J. A. Carroll.

By 1918, the practice of according each male teacher the status of “Esq.” had also been abandoned.

While there are many differences between the BHS of the early 1890s and the late 1920s (the size and composition of the faculty, the curriculum and the physicality of the school) in these important respects there was a constancy: the provision of a good classic education, the production of teachers to educate the province’s young, and the existence of opportunities for literary involvement of male and female students. 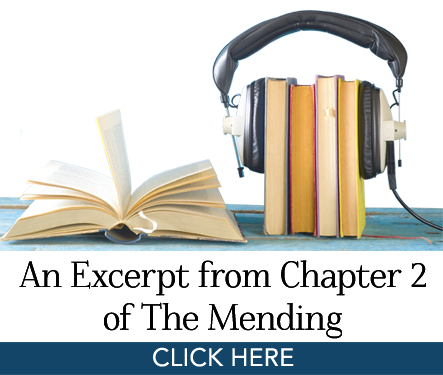