ALL THE OLD CHURCHES

Ever wonder why there are (or were) so many old United Church buildings in your community? The answer lies in part in the size of the denomination’s membership. At its peak in 1964, the United Church of Canada claimed over one million members. But the answer lies as well in the number of corporate mergers to which it and its predecessors have been party. If your community existed in Canada in the 1800s, it is possible that a number of the denominations that came together to form the United Church of Canada had a physical church in your community. Given how well those buildings were constructed, many may still be standing.

In this article, we’ll look at the history of the two main branches of Protestantism that came together to form the United Church of Canada: Methodism and Presbyterianism. We will consider how they came to be in existence, what they stood for, and how they were organized. We will look at the mergers to which they were a party. Then taking Brampton as an example, we will look at the old churches in the downtown area to see how they were affected by some of these mergers. 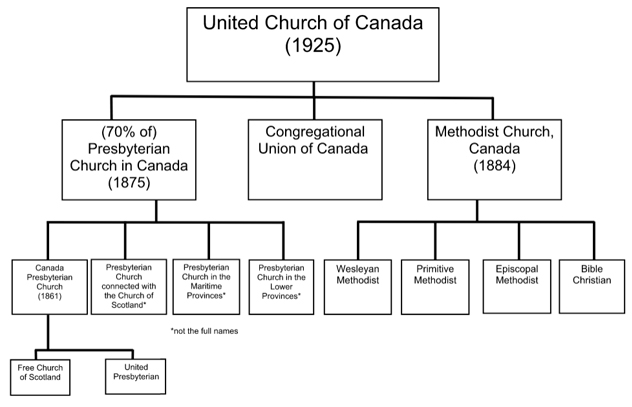 Presbyterianism traces its roots back to the 1400s as the Scottish Church was influenced by theological reformers such as John Wycliffe (1330-1384), John Knox (1512-1572) and John Calvin (1509 -1564). Although it was rocky road, eventually a “Presbyterian” governance structure was adopted by the Scottish Church, led by ascending courts (or groups) of ministers and elders. Presbyterians believe in the sovereignty of God, the authority of the bible, and the provision of grace through faith in Jesus Christ.

Methodism is a revivalist form of Protestantism that originated within the Church of England, principally from the teachings of John Wesley. Following his death in 1791, those adhering to his “methodical” way of living the Christian faith became a separate denomination.

There were many branches of Methodism. Like Presbyterianism, what they all had in common was their adherence to scripture, lay ministry, works of piety and their belief that salvation was available to all.

It was just as well that Methodists and Presbyterians subscribed to lay preachers. Life in the “bush” as the sparsely settled area outside of York (Toronto) was known could not have supported full time professional clergy. Like-minded adherents congregated in each other’s homes where they received the Word from the most devout or loquacious among them. Occasionally the ministrations of the local leaders were supplemented by more seasoned preachers.

William Lawson shared Elliott’s pedigree. Also a strong Primitive Methodist from Brampton, Cumberland, England, Lawson was a commanding preacher even before he left England. On settling in York in 1829, Lawson, purchased premises on King Street from which he sold wares and “saved souls.” His evangelism, administered on the nearby streets, ultimately led him into the “New Settlements” as a circuit preacher.

It was in this way that in 1831, William Lawson found himself in the homestead of his old friend John Elliott. Lawson was so taken with the community of adherents assembled in Elliott’s kitchen--and the area itself--that he sold his business in York and moved to join Elliott. Lawson opened a general store at the intersection of the Hurontario trail and Number 5 Side Road. The store would become the centre of the thriving settlement. Elliott became the town’s first developer, subdividing and selling lots in that same area, which together the two friends coined “Brampton”. The name would eventually describe not only that little settlement, but over 100 square miles around it.

Under the charge of Lawson and Elliott, the number of Primitive Methodist adherents in the Brampton area continued to grow. Soon the congregation was too large to meet in the home of Elliott. Premises in which the local Primitive Methodist adherents could worship as one were secured on the second floor of a Queen Street building. Square wooden pews with gates at the aisles were installed in the sanctuary. A separate Sunday school room was established.

In executing the local merger, the Brampton Methodist churches had as an example two mergers of the Presbyterian Church in Canada. The first merger occurred in 1861 when the Free Church of Scotland and the United Presbyterian Church came together in the Province of Canada to form the Canada Presbyterian Church. Of more local relevance perhaps was the 1875 merger of that church with three other branches of Presbyterianism. The newly merged church had congregations in Brampton, one of which met somewhere on Church Street and the other at 19 John Street. Within two years the merged church had disposed of the old Church Street site and agreed to purchase a property at another location on Church Street on which they would build a new large church to accommodate the two congregations. That church, now known as St. Andrew’s Presbyterian, was dedicated in October, 1881.

The second reason that the three Methodist congregations could not come together as one, was because those faithful Episcopalian and Wesleyan Methodists, on the one hand and those faithful Primitive Methodists, on the other hand, each committed to spreading the love of Christ, well….they didn’t see that they had a whole lot more in common. I think it’s fair to say that the Wesleyan- Episcopalian Methodists, who counted among their members a number of the town leaders, looked down on the Primitive Methodists, who were more puritanical in their moral code and, with sermons frequently interrupted with shouts of Amen and Hallelujah, were more fervid in their beliefs.

This dissonance was not fleeting. In reading the Conservator in the years of the Great War, when men and other resources were scarce and church congregations like others had to share assets, I was struck by how often the Presbyterians and the former Wesleyan-Episcopalian Methodists alternated service locations. One might have expected the two Methodist churches to do so. That camaraderie between the Presbyterians and the former Wesleyan- Episcopalian Methodists had its limits though as will be seen below.

Formation of the United Church of Canada

All of the separate church buildings pictured in this article still stand and all but one –the one at 19 John Street—continue to operate as churches. The congregations affiliated with them are smaller than they once were. But each Sunday their clergy preach from the Bible—physically distanced or remotely in these COVID times-- in one or more services, in one or more languages. In the tradition of Calvin and Wesley and through the example of Jesus Christ, they serve the needy and downtrodden in our community through outreach programs, food banks, and counselling and other programs. 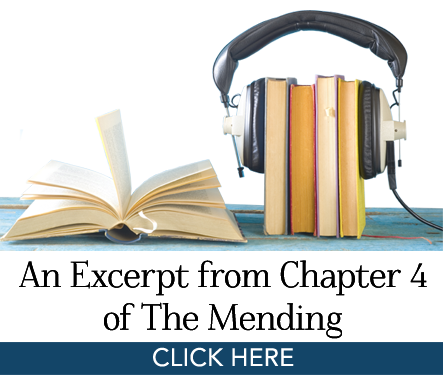