One of my cherished childhood Christmas season memories is of the wooden bowl my mother placed on our living room coffee table filled to the brim with in-the-shell Christmas nuts—almonds, walnuts, pecans, hazelnuts and, my favourite, brazil nuts. Set among those shelled treats were stainless steel two-handled spring-action nutcrackers and the complementary long picks used to ensure that no part of the nut within the cracked shell remained out of our reach. The related memory is of my mother’s admonition not to make a mess with the cracked shells.

One of the cherished childhood Christmas season memories of my children is likely the display on our living room fireplace mantle of five large multi-coloured soldier-like nutcrackers—all different sizes and in different garb—one the possession of each of our family members. The related memory might be my admonition to my daughter Elexa--a frequent child performer in Nutcracker ballet performances-- not to play with the displayed nutcrackers.

So which came first as a Christmas tradition: the nut, the painted wooden toy soldier nutcracker or the Tchaikovsky Nutcracker ballet? It seems it was the nut.

Nuts as a Christmas Tradition

For centuries nuts have been a part of holiday traditions. Once associated with fertility, in ancient Roman days, nuts were scattered on the ground at weddings and holidays including the winter holiday of Saturnalia which honoured the agricultural God of Saturn. With the spread of Christianity, the holiday nuts took on a measure of Christian symbolism, with their three parts – the shell, skin and kernel—said to represent the holy trinity. (Truly, you can find threes in almost anything.)

But the practice of strewing nuts continued. In Germany and other European countries, St Nicholas was said to arrive at parties on his name day carrying a large bag and strewing on the ground nuts and other goodies for children to scramble after. Indeed in the age of Elizabeth I, boys played a game called “scrambling for nuts”. It seems that only in the Netherlands was a steadier hand applied to the placement of nuts. There, St. Nicholas set them in the wooden shoes of good children.

Given the source of “Christmas nuts” it is no wonder that they were historically considered a holiday treat. Most had to be imported from afar. Almond trees, for example, grew in semi-tropical places like Asia and North Africa. Brazil nuts, not surprisingly, grew in South America. Pecans are native to North America where they were harvested by Indigenous peoples. Only chestnuts, walnuts, and hazelnuts (filberts) were native to Europe.

Of course the nuts could be strewn on the floor at weddings or at parties or even put in the potentially smelly wooden shoes of children because long before the advent of cellophane or other plastic wraps, nuts came in a natural wrapping. Their hard shells protected them from dirt and predator-- human beings and rodents being the exceptions. Rodents, like squirrels and chipmunks tend to open the nuts within their warm nests in the cold winter months, just like we do. 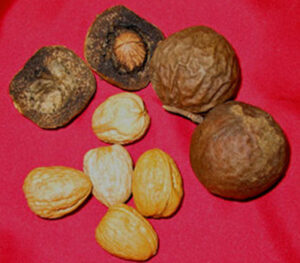 But whereas squirrels and chipmunks have within their sharp incisors a natural ability to open nut shells, some of us humans can barely eat an exposed whole almond without breaking or cracking our teeth or incurring other “temporal mandibular disorders”. A mini-epidemic of such calamities is said to have accompanied the recent drive to increase our consumption of such nutrition packed morsels.

We humans needed another way to open nut shells.

Presumably early humans opened nut shells with a swift dash of a small rock. Over time, methods advanced and specific tools were created to allow access to the delicious nut within the shell. The designs varied. In India, some took the form of brass crocodiles; in England, cast-iron squirrels. In northern Europe, some were made of porcelain. However the most common material was wood and by the late 1600s German woodcarvers in the Erzgebirge region began to fashion it into the soldier-like dolls we know today.

Made in workshops with other carved toys and puzzles, in the early 1800s German toymakers began selling their wares in Russia, Poland and Norway. In 1872, using a lathe, Friedrich Wilhelm Füchtner, the “father of the nutcracker,” began mass production of the wooden soldier nutcrackers at his workshop in Seiffen, Saxony.

In many households, the nutcracker served the dual purpose of being both a useful tool and a toy for children. To this point however, the soldier-style nutcrackers were not specifically Christmas themed. 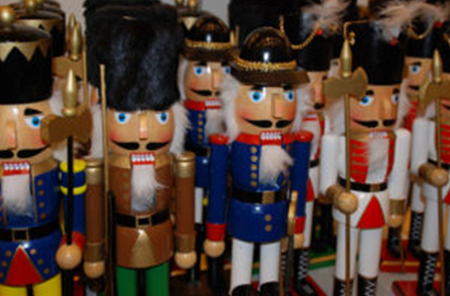 The association of wooden soldier nutcrackers with our Christmas traditions is likely attributable to the orchestral score created by Pyotr Ilyich Tchaikovsky in 1892 for Alexandre Dumas Père’s ballet adaptation of E. T. A. Hoffman’s 1816 story “The Nutcracker and the Mouse King”. Featuring a toy-soldier nutcracker that comes to life on Christmas Eve, the ballet has become associated with Christmas although it contains no Christian theology.

The Nutcracker came to be Tchaikovsky’s most popular work, the most frequently performed of all ballets and an introduction to classical music to millions of young people. This though would not have been foretold when it was first performed in December, 1892 in St. Petersburg. Afterwards Tchaikovsky remarked that the ballet gave little pleasure and was in fact rather boring. He considered it to be “infinitely worse than Sleeping Beauty” (the second of his three ballets; the first being Swan Lake). The newspapers reviled it.

Eventually though, with improvements in the choreography, further reinterpretations of Hofmann’s story and the addition of new sets and costumes, the production gained popularity. It was first performed outside of Russia in 1934 in London, by what is now known as the Royal Ballet. Performances followed in America (1944, by the San Francisco Ballet) and New York (1954 staged by George Balanchine, whose version led to its great popularity). It was first performed in Canada in 1952 (the National Ballet of Canada at the Eaton Auditorium). The ballet has been reimagined many times including by Canada’s JorgenDance which set it within a Group of Seven Canadian landscape.

The growing popularity of the ballet in the United States coincided with the number of Americans serving in and returning from service in Germany in the years immediately after World War II. A favourite gift for waiting wives and daughters were the colourful wooden nutcracker soldiers manufactured there. It isn’t clear whether the wooden soldiers were valued by those serving because, or in spite, of the fact that they somewhat resembled their recently defeated German foes. Of course, much of what becomes popular in the United States becomes popular in Canada.

While my great aunt Jessie enjoyed the Nutcracker Ballet later in life and eventually had a wooden nutcracker decoration at Christmas time, she was likely unfamiliar with the ballet as a child growing up in Canada in the early 1900’s. The wooden nutcracker she would have had might have been in the form of a carved wooden animal (popular at the time). The performances she would have seen would not have been Christmas ballets performed in a theatre, but rather Christmas pageants performed in her church. Interestingly though, the decidedly non-biblical characters of a Sugar Plum Fairy, a Russian dancer, an Arab dancer, a Chinese dancer and waltzing flowers, all hallmarks of the Nutcracker ballet, were not that different in nature from many characters that filled the stage at Brampton’s Grace Methodist Church at Christmas time, 1914. For more on that see an excerpt from The Beleaguered here.

With thanks to the work done by these writers:

The Nutcracker Ballet by Tchaikovsky, By Betsy Schwarm, https://www.britannica.com/quiz/browseIn a Nutshell, A brief history of nutcrackers .By Noreen Malone , Slate ISSN 1091-2339

History of the Nutcracker, https://www.nutcracker.com/about-us/history-of-nutcracker