The Christmas Dinner – Now and Then
By Colleen Mahoney

Christmas traditions astonish me. In part because there are so many of them! And, for every one or two little Christmas rituals unique to a family, there are many more that are universal. For instance, most of us have experienced the marvel of a beautifully decorated Christmas tree, sipped a perfectly spiced eggnog, sucked on candy canes until our tongues were red, rushed to the Advent calendar to see what surprise would appear behind the little paper door, constructed a gingerbread house using icing and smarties, teared up watching A Charlie Brown Christmas, hummed along to a performance of the Nutcracker, listened to a choir perform Silent Night or a band blast out Jingle Bell Rock. These traditions are totally familiar to all of us and I could, quite literally, go on and on…but I’d run out of space in this newsletter. So instead, for this column I’m going to concentrate on just one… the big one - the Christmas dinner.

As a general rule, the traditional Christmas dinner with which we are familiar showcases a turkey, accompanied by an array of delicious side dishes and followed by several different types of dessert. But where did it all start? And…why this uniformity? Let’s explore…

The Christmas dinner as we know it today, can be traced to Victorian times and perhaps, more specifically, to Charles Dickens. Many credit the Cratchit family feast described in A Christmas Carol with creating the framework of the modern Christmas dinner: a roast bird with trimmings, pudding and a warm drink. 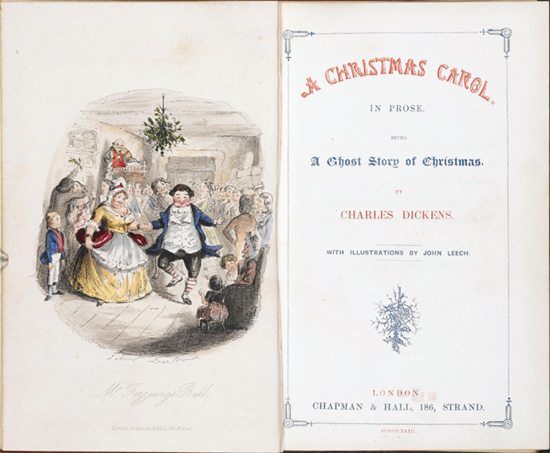 And so, I am going to take my cue from Dickens and review all the required dishes and drinks.

“At last the dishes were set on, and grace was said. It was succeeded by a breathless pause, as Mrs. Cratchit, looking slowly all along the carving-knife, prepared to plunge it in the breast; but when she did, and when the long expected gush of stuffing issued forth, one murmur of delight arose all round the board, and even Tiny Tim, excited by the two young Cratchits, beat on the table with the handle of his knife, and feebly cried Hurrah!”

Today, the turkey is (predominately) the go-to “bird” for Christmas, but a goose, chicken or capon is not unheard of.

Native to the Americas, the turkey first arrived in Britain in the mid 1500’s. For several centuries, and for obvious reasons, turkeys were rare, exotic and pricey and so, of course, they had to be added to the lavish Christmas meals of the elite! And for a period of about three centuries, the turkey continued to be a sign of status and wealth. This helps explain why, after Scrooge was visited by the three ghosts and completely changed his outlook on life, he immediately purchased the biggest turkey he could find to send to Bob Cratchit and his family for their Boxing Day meal. 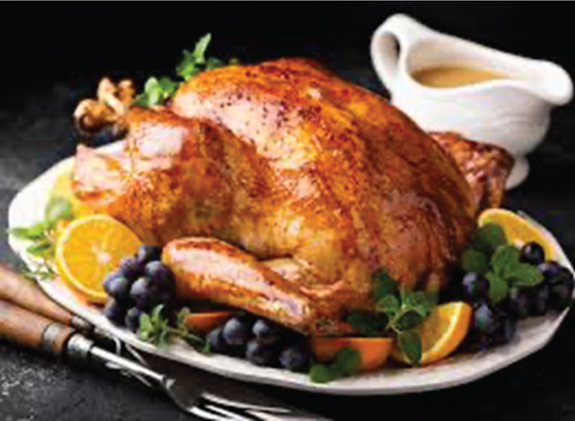 Gradually, over time more turkeys were imported and bred and their cost declined allowing them to be a more accessible option for the Christmas dinner of the lower classes. But up until that time, the lower classes had to make do with the goose. There were several reasons for this; they were plentiful, they didn’t produce milk like cows or sheep, they only laid eggs seasonally (unlike a chicken which lays all year long) and they were relatively inexpensive. So it was the unlucky goose that was fattened in the Fall and devoured at Christmas.

The “bird” is traditionally roasted, with a bread stuffing – as Mrs. Cratchit has done. And this was certainly what I grew up on. But many variations have emerged over the years and become firmly established as family or regional traditions. For instance, in the southern United States, they favour corn bread over flour bread. The Germans include spicy sausage like bratwurst. And apparently New Englanders claim stuffing isn’t worth eating if it doesn’t involve oysters!

Apple sauce with dinner was not a tradition I grew up with but I could imagine it complimenting the turkey quite nicely. Cranberry sauce is more likely to grace the Christmas dinner table in Canada. Cranberries are native to North American and were used by the First Nations’ as food (high in vitamins C, A, E, B-complex and K, manganese and copper), medicine (high in antioxidants and anti-inflammatories), and as a dye for clothing. Settlers arriving on North American shores adopted the fruit wholeheartedly primarily because it was abundant and for its nutritional benefits, but also because of its ability to be stored for long periods of time without rotting. Did the early settlers add cranberry sauce to their first Thanksgiving meals? No one really knows the answer as there is no record of it until American Cookery was published in 1797 by writer Amelia Simmons recommending cranberry sauce as an accompaniment to turkey.

“But now, the plates being changed by Miss Belinda, Mrs. Cratchit left the room alone—too nervous to bear witnesses—to take the pudding up and bring it in. Suppose it should not be done enough! Suppose it should break in turning out! Hallo! A great deal of steam! The pudding was out of the copper. A smell like a washing-day! That was the cloth. A smell like an eating-house and a pastrycook’s next door to each other, with a laundress’s next door to that! That was the pudding! In half a minute Mrs. Cratchit entered—flushed, but smiling proudly—with the pudding, like a speckled cannon-ball, so hard and firm, blazing in half of half-a-quartern of ignited brandy, and bedight with Christmas holly stuck into the top”.

The Christmas (or Plum) pudding has an interesting history. It also dates back to the Middle Ages, at which time it was called “frumenty” and it included many ingredients you would expect in a Christmas pudding – wheat, milk, plums, prunes, raisins, wines and spices - and some you would not – like beef and mutton! The result was a savoury, rather than sweet dish. By the 17th century, this treat had evolved to include eggs, bread crumbs and beer…which sweetened it up a bit. As we head into the Victorian Era, it starts to resemble something much more familiar. Meats were no longer de rigueur, and instead, recipes included the now traditional fruits, such as currants and raisins, citrus peel, lemon juice, plus sweeteners like brown and white sugar, sweet almonds, marmalade and brandy. If you were a stickler, your pudding would include no more or less than thirteen ingredients, which would symbolize Jesus and his twelve apostles. 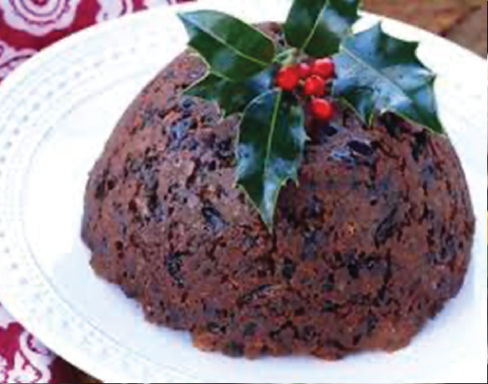 Once the ingredients were combined, it would be shaped into a dense ball and wrapped in a pudding cloth and then steamed for several hours. When it was deemed done, it would be carefully removed to a serving dish, doused in brandy, crowned with a holly sprig and, on presentation at the table, lit on fire.

“Bob, turning up his cuffs, compounded some hot mixture in a jug with gin and lemons, and stirred it round and round and put it on the hob to simmer”. At last the dinner was all done, the cloth was cleared, the hearth swept, and the fire made up. The compound in the jug being tasted, and considered perfect, apples and oranges were put upon the table, and a shovel-full of chestnuts on the fire. Then Bob proposed:

“A Merry Christmas to us all, my dears. God bless us!”

I honestly do not know what concoction the Cratchit family was drinking. I could not find any reference to a traditional Christmas gin drink. Perhaps gin was Dickens’ liquor of choice or perhaps it was affordable in Victorian England and he could imagine it within reach of a poor household.

In any case, today eggnog is the drink most often associated with the Christmas season. Again, the idea of eggnog dates back to the Middle Ages and again it was known by a different name.  It was called “posset” and consisted of eggs mixed with figs and warm ale punch.  Definitely, not the recipe I will be trying.  Like Christmas pudding, the ingredients were refined over time.  Sherry replaced the beer and this was combined with milk and eggs.  The result was likely a luxury only the wealthy could enjoy because of the scarcity of the sherry, milk and eggs.  I was actually surprised to learn that milk and eggs were not readily accessible to everyone, but apparently pre-refrigeration, many who in the cities and towns would rarely see either of these commodities. 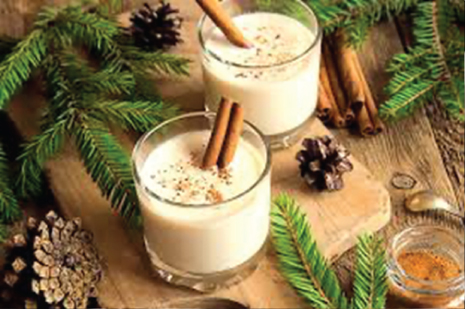 As North America was settled, the concept of eggnog was refined once more.  Whiskey and rum were readily available in the colonies, eggs and milk were plentiful and eggnog became a Christmas time treat that everyone could enjoy.  Apparently, George Washington was famous for serving a killer eggnog at Christmas that included whiskey, rum and sherry!

And so, as Tiny Tim observed, God bless Us, Every One!