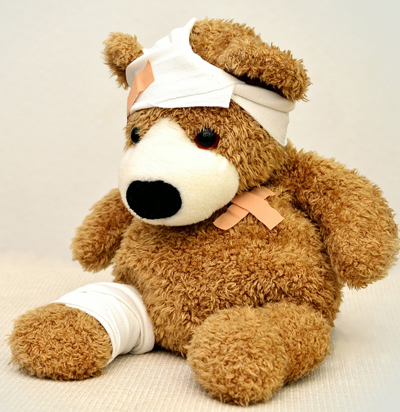 After reading earlier this month about the tender surgery recently performed by Dr. Daniel McNeely on the bear of his paediatric patient Jason McKie, I went in search of my favourite childhood doll. Baby Secret, with her wiry red hair, had a sweet rubber face and adorable rubber fingers. About 16 inches long, she sported a permanent red jump suit that fit tightly around her firmly packed body with its immovable arms and legs. She was always perfectly positioned to be held upright on one’s arm or to be laid prone in one’s bed. Her special feature was her ability to whisper secrets. After pulling her long cord, she frequently told me that she loved me; that I was her best friend. (Her second best friend, a doll named Drowsy who belonged to my best friend Margaret, could only utter such things as “I’m tired.” I knew I had the more interesting of the two dolls.)

Over 50 years ago on a warm summer day, Baby Secret received life-saving surgery at the hands of Dr. and Nurse Golding. (We had very stereotypical roles in those days. I will leave it to you to guess which of my parents was the surgeon and which the assistant nurse.) The need for the surgery arose from an encounter Baby Secret had with our otherwise gentle Brittany Spaniel.

We had left both of those two cherished pseudo-family members alone in the Port Sydney cottage of my father’s family while we went to visit the nearby Lake Simcoe cottage of my mother’s family. (I know: rough childhood.) Bringing the dog with us on this half-day excursion was out of the question. One did not take one’s dog to other peoples’ houses in those days.

But why? Why oh why did I leave Baby Secret behind? Other than when I went to church and school, Baby Secret went with me everywhere. Why did I not take her with me that day? I knew my older cousin Laura, with whom I would be playing that day, did not like Baby Secret. It wasn’t personal, she told me. She didn’t like any dolls. But I could have left Baby Secret in the car for the few hours I frolicked in the sandy lake. She never minded the heat!

The folly of that oversight will forever haunt me. As we returned to Port Sydney and opened the heavy old door, we were greeted by a sight of pure carnage. Strewn before us were bits of skin and flesh (fabric and foam). Baby Secret lay nearby, her bones (wires) in gruesome positions; her fine facial features and fingers heavily gnawed.

Pulling me out of hysterics, the doctor and nurse assembled the patient, her various body parts, and the necessary surgical implements—sewing shears, needles, and red thread and fabric. Miraculously, my mother had recently sewn something in that colour. Rushing into the small operating room (our kitchen, a 6’ x 4’ space barely large enough to hold two appliances, a sink, and a small counter), they pulled back the folding door and began their ministrations. For the next hour they issued occasional reassuring reports as I paced before the big stone fireplace and glared at my formerly loved dog, then under the protection of my brother John.

Eventually the surgery was complete. It was a success. Baby Secret had three skin graphs and nearly 100 stitches! But her limbs had been reset. Nothing could be done, unfortunately, for the partially missing nose and fingers. She would spend the rest of her life looking as though she was in what I imagined to be the early stages of leprosy.

Nor could anything be done for her pre-existing conditions. She was becoming decidedly bald at the back of her head from the amount of time she spent lying down and she had long since become mute, the cord that was pulled to elicit her secrets broken from overuse.

But I loved her nonetheless and she remained my constant companion long after the days that girls were supposed to stop playing with dolls.

After reading that article I went in search of her. Years ago I wrapped her in a blanket and settled her in a basket. But where is she? I searched all the usual storage spaces in my house—and there are quite a few. All I found was her favourite dress, which had been my christening dress, and was later worn by my youngest child’s stuffed dog.

But I could not find her, this doll dear to me for so long. Where is she? Maybe it’s a secret.

Lynne Golding is a lawyer with Fasken Martineau DuMoulin LLP. Later this month her first novel, The Innocent, will be published by Blue Moon Publishers.