A Brief History of Hats

The life of a Pastor is not always an easy one, particularly when one must serve as the enforcer of rules contrary to the custom of the times. Witness the plight of Rev J. L. Gordon, of the crowded Winnipeg First Congregational Church, who in December 1907 required the ladies among his congregation to remove their hats—“elaborate creations of the Gainsborough type”. All but four ladies complied. It was said to be the first time such a rule had been enforced in the Dominion.

Being a fan (though rarely a wearer) of fashionable hats, the short 1907 newspaper article got me wondering: what is a Gainsborough-type hat? How have the rules and customs of hat wearing changed over the years?

The Practicality of Hats

Hats have been worn since the earliest of times, chiefly then as now, for very practical reasons. Hats protect the wearer from the elements: rain, sun and wind and for those living in northern climes, from snow and the escape of necessary body heat. But in days gone by, when one’s chief mode of transport was by foot or in an open cart, the protection offered by the hat was considerably more important than it is today.

The wearing of hats was more important in by-gone days for other reasons too. In cities, in a time when most homes were heated by coal, hats protected the lids of those outdoors from another element as well: soot. Hats elongated the period of time a wearer could go without a hair wash, an important factor in a time when its washing was infrequent.

Similarly, in days before homes were equipped with washing machines and dryers, effort was taken to reduce the need for the laundering of bed sheets. Night caps, worn by men and women, kept those slumbering warmer while in a nocturnal state and protected bed linens from the tonics and powders liberally applied to the hair of prior ages.

Today we think about other practical reasons for wearing hats: the hard hats worn by construction workers; close fitting caps worn by those in the food preparation industry; surgical caps worn by doctors and nurses, to name a few.

Of course, not everyone had to wear the same kind of head covering. Over time, hats took on different meanings. Some indicated one’s marital status; others, one’s social standing. Some were worn for religious reasons.

Monarchs and aristocrats wore crowns and tiaras. Indigenous chiefs wore head-dresses. But the pecking order for lesser mortals could at times also be discerned by what they wore on their noggins. During the Regency period, for example, all women wore “caps”. (Picture the women in any movie inspired by a Jane Austen book.) These tight fitting head coverings worn by girls and grown women covered all but a few ringlets. A woman’s full head of hair was, in those days, able to be seen by those outside her family for a very short period of her life: the period of time from when she was “no longer a child” to the time ---or just a little after the time--at which she was wed; and on those evenings at which she attended a social function.

One of the most popular caps of the time was the mob cap. It had many of the practical functions set out above plus one other: it easily allowed a full bonnet to be set upon it. Eventually these caps took on a more flattering form with the addition of ruffles and trimmings although the extent of the decoration was limited by one’s social class—the higher the social standing, the frillier the cap.

We often think of hats as being religiously prescribed. Yarmulkes are required to be worn by men in certain synagogues. Observant Sikh men wear turbans and some devout Muslim and Christian women cover their heads. Conversely, the puritans who left England in the 17th century in pursuit of religious freedom considered hats to be an unnecessary extravagance. For a time, their dress code strictly prohibited the wearing of hats when not required for practical reasons.

As a staple of daily attire, the style and type of hat worn by men and women changed with the fashion of the day.  Looking at women’s hats during the period of the four decades touched by the Beneath the Alders series alone, one can see discernible differences. For a full description, see the excellent article here: https://bygonetheatre.wordpress.com/2014/04/29/a-brief-history-of-womens-hats-1900-1960/ from which I have drawn in writing this section of this article.

In the first decade of the twentieth century, hats sat above the head--often high above the head –sometimes being referred to as being three story or flower pots.  The base of the hat was similar to the masculine boater or trilby but the “top stories”, with feathers, bows and flowers were unique to the female style.

By the second decade, the base of the hats became larger with brims often extending past a woman’s shoulders. Covered in plumes and flowers, large pins were required to keep the hats in place.  This is the Gainsborough-type hat with which the parishioners within Rev. Gordon’s church were required to contend. 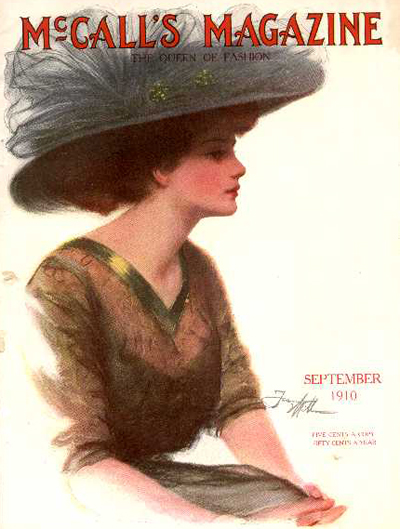 With the onset of the war, the size and extent of decoration of the hat began to recede. The hat sat closer to the head and lower-down on the face. It was considered unpatriotic to be too concerned wth fashion.

The trend toward low-close fitting hats continued in the immediate post-war decade, typified by the “cloche hat”. Bell shaped and mostly brimless, it covered much of the head, with little in the way of adorning flowers or feathers. A crescent at the lower back portion allowed long hair wound at the nape to sit below it. 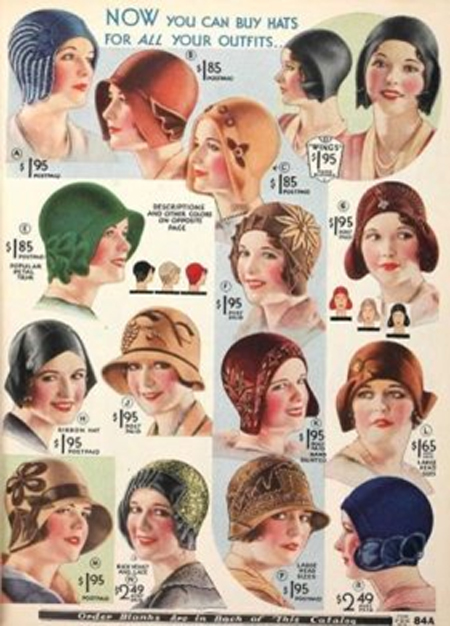 With hair styles moving away from the short flat look of the roaring ‘20s and towards the full curled style of the ‘30s, hats sat higher on the head and brims returned.

The demise of men’s hats as a fashion statement

We’ve spent a lot of time talking about women’s hats. Let’s face it, they are a lot more interesting than the fedora and trilby. But the demise of the hat as a necessary component of a woman’s wardrobe likely took its lead from the same demise in the men’s.

John F. Kennedy, who attended his 1960 presidential inauguration in a hatless state is often identified as the catalyst of the trend. In reality though, hats were on their way out as a fashion requirement in the 1950s. Dwight Eisenhower, JFK’s predecessor, also attended his inauguration hatless and photographs of the crowd attending the Kennedy inauguration show many men without hats.

Why did this happen? A number of reasons have been offered:

From this ad we learn a couple of things about the time. The meal at the end of the day is called tea. Men were shaved in the latter part of the day, presumably to give them a smooth face (or at least the portion of their face not covered by moustaches, beards, mutton chops, etc.) for the remainder of the evening and especially on Saturdays, to last them through Sunday.

The demise of women’s hats as a fashion statement

It would take another decade or so before the hat was eliminated as a necessary component of a fashionable women’s wardrobe. In watching Mrs. Maisel and the fabulous matching hats she had for each of her outfits, I think I can identify two other reasons for the decline as it related to women’s fashion:

Jackie Kennedy’s pill box hats sitting atop her bouffant coifed hair was likely the last stand in the march away from the hat as a necessary fashion accessory. 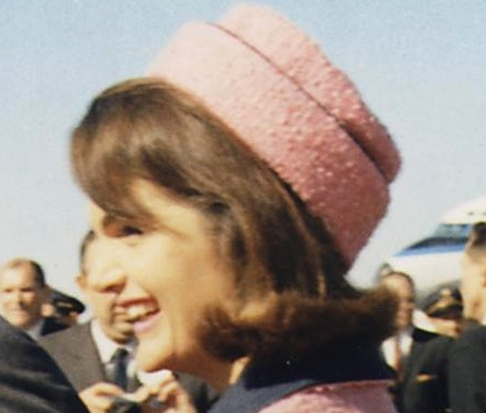 Probably the most popular hat worn by men today is the baseball cap. Like the mob cap worn by Regency era women, the baseball cap is tight fitting to the head. By one account, more than 40 million baseball caps are sold every year accounting for more than 80% of all hat sales in the United States. 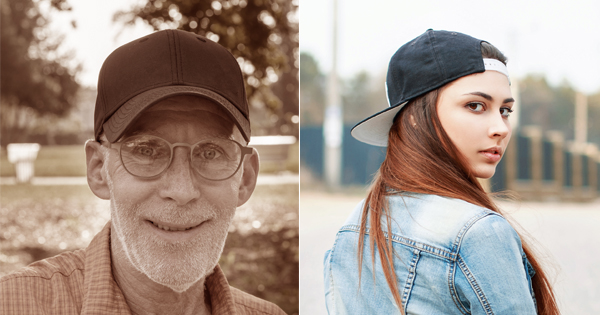 Originally created for the players of the game in the 1860s, baseball caps are now worn by others for professional purposes (e.g. military, police forces and security firms), by celebrities, who pairing the hat with large dark sunglasses seek to appear incognito and by most others for leisure purposes. For many, baseball caps are a fashion statement themselves. In the 1990s a trend emerged of wearing a baseball cap backwards. Although seen as disrespectful and defiant by some, it is still a popular look today.

Throughout history the removal of a hat by men when indoors was seen as a gesture of respect. The rule of etiquette is likely derived from the medieval times. A knight who failed to remove his helmet and identify himself risked being immediately put to the sword.

There were other circumstances as well in which etiquette dictated the removal of a hat including in the case of men when greeting a boss, and always in the presence of a lady. Ladies on the other hand were exempt from such rules. They could wear their hats at all times.

While some of these rules no longer apply, the removal of a hat by men, and women in certain circumstances, is seen as a sign of respect. The exception is for cancer patients, who may wear their hats at all times.

For a listing of the Emily Post Hat Etiquette rules for men and women https://emilypost.com/advice/hats-off-hat-etiquette-for-everyone and reproduced in this newsletter.