Brampton as the County Seat of Peel

We’ve all heard about municipal amalgamations—the creation of megacities—the trend over the past five decades or so intended to reduce the number of governments and politicians. A century and a-half ago, the trend in Ontario was just the opposite. Municipal governments were proliferating as villages, towns and counties separated from each other and formed their own elected councils.

Thus in 1853, with the first local rail line in its sights (click here for more on that) Brampton was incorporated as a village. The small community with less than 1000 people, separated from the governance of Chinguacousy Township, the immediate geographic area in which it was located. Brampton continued to be within the county of Peel, the larger geographic area in which it was located.

Peel County had been created two years earlier in 1851, based on the recommendation of Lord Durham following the 1837 Rebellion. The county was comprised of five townships: Albion, Caledon, Chinguacousy, Toronto Gore and Toronto. Toronto Township, at the south end of the county, should not be confused with the city we now know as Toronto and which was then known as York. The area once known as Toronto Township is comprised of the area mostly known today as Mississauga.

Although in 1851 Peel was created as a separate county, it did not have its own government. At the same time that Peel County was formed, so too were the counties of York and Ontario. Ontario County, which covers areas like Whitby and Pickering in the region we now know as Durham, should not be confused with the Province of Ontario. At the time these counties were created, the area we now call the Province of Ontario was known as Canada West. Together with Canada East, they formed the Province of Canada. When Ontario became a province, Ontario County was a county within it. Think of New York, New York.

Even though Peel, York and Ontario were separate counties, they did not have separate governance. In addition to recommending the creation of the three counties, Lord Durham recommended that they be governed as one. Thus at the time the counties were created, so too was a single governing council. The United Counties Council was comprised of elected representatives of each of the three counties.

The counties had not long been united when Ontario County sought to exit the union. Its representatives considered the area to be governed by the council to be too large; the distance to be travelled to attend meetings of the council, too great. By 1854, the United County was comprised only of York and Peel. 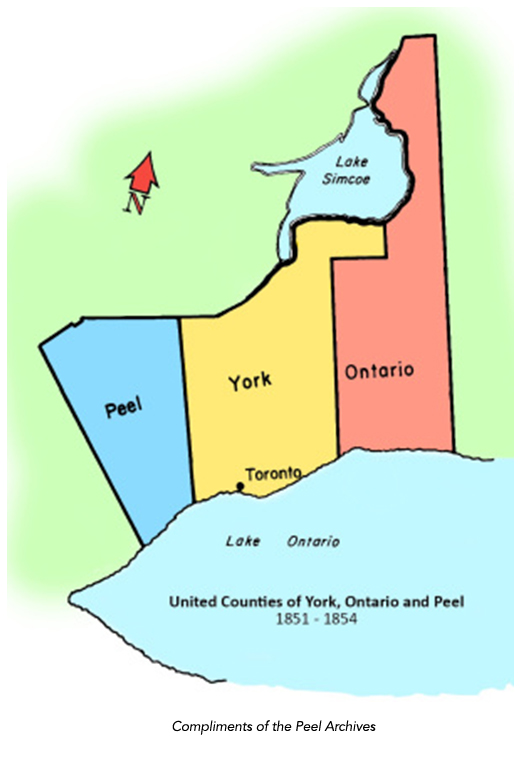 With the example of Ontario’s independence before it at the county level and Brampton’s independence at the village level, Peel County moved to establish its own governance. In 1856, a vote of the Peel County electors (property owning men) was taken. By a small margin the majority voted for separation. The narrowness of that vote was a harbinger of what was to come.

Three conditions had to be satisfied in order to effect the separation. As an initial matter, the county had to continue to have the will to separate. Based on various votes taken over the following years, that will was at times in short supply. Six years after the first vote was taken and with separation not yet attained, the electors voted to forgo independence and continue Peel’s association with York. But that resolve was short lived. The following year, in 1865, a majority of the electors again voted to proceed with separation. The second and third conditions will be described below.

Ever wonder why media reports refer so frequently to court cases in Brampton? Do you wonder why the Peel court house is located in Brampton? It isn’t because the city is equidistance from Caledon in the north end of the region and Port Credit in the south.

Back in the mid 1860’s, as Peel County was in the process of establishing its own governance, it was required to select a county seat—a capital of the county, if you will. The decision was initially made by the provisional county councillors—representatives from the townships of Albion, Caledon, Chinguacousy, Toronto and Toronto Gore. There were a number of contenders over the years but the main three were: Brampton, Streetsville and Malton.

Several votes of the provisional council and the electorate were held but none was found to be decisive. Eventually, in 1860 the provisional council chose Malton, but mostly because it was everyone’s second choice. A form of buyer’s remorse set in and the councillors chose to refer the question to the electors. Brampton was again chosen but because other conditions for the separation were not met, the vote was not determinative.

In 1865, when the electors were again asked to support separation from York, they were also asked to indicate on their ballot where the county seat should be located. Many locations were offered including “at home” but of all the places proposed, Brampton received by far the most votes—2,311 compared to 494 for Malton, 326 for Port Credit, 88 for Streetsville and much smaller numbers for two dozen other places.

Back in the day, it was a condition of self-governance that each county have a court house and a jail (or a gaol) located within its county seat. The buildings would be paid for out of taxes collected in the county pursuant to a by-law approved by a majority of the electors. Possibly as a measure of political comeuppance, in the early 1860’s after Brampton had first been selected as the county seat of Peel, the by-law approving the expenditure of funds on the county buildings there could not garner the support of a majority of voters.

Eventually, five years later, in 1865, with the voters once again supporting separation and Brampton being overwhelmingly selected as the county seat, the provisional council proceeded diligently with the construction of the county buildings. They began by acquiring land for the buildings. Purchased for $1.00 from John Elliott, one of Brampton’s founders and a large landowner, the land was located at the corner of Main and Wellington Streets.

William Kauffman, a well-known Toronto architect was retained to design the court house and the jail. Construction of the buildings was then put to tender. The provisional council began by selecting the contractor for the court house. Though it was not obliged to do, the council selected the bidder with the lowest price: Fergison and Mogridge, of Brampton. Unfortunately, the price was so low, Fergison and Mogridge could not obtain bonding. Their bid was forfeit and J. Kesteven of Toronto, the second lowest bidder was selected.

Three months later, the provisional council selected the contractor for the jail. Once again the provisional council chose the lowest bidder—again Mogridge--whose price again was so low he could not obtain bonding. But rather than select the next lowest bidder, the council ran another bidding process. Though he did not submit the lowest price bid, J. Kesteven of Toronto, who was working mightily to finish the construction of the court house in the required ten month period, was selected to construct the jail as well. The first meeting of the independent Peel County council was held in the new court house in January 1867. 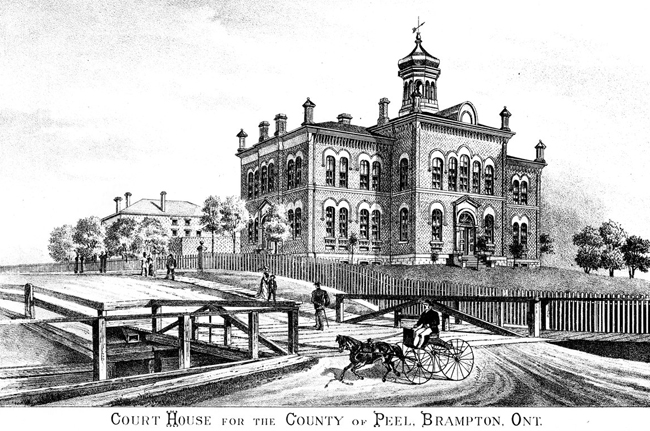 Eventually, Brampton outgrew both that court house and the jail. The jail was condemned for use as a place to incarcerate people. The last of its prisoners was transferred to the Don Jail in Toronto in 1977.

In 1973, the county court house operations were moved to a modern building on Clarence Street and Kennedy Road. The operations were relocated again in 2000 to the A. Grenville and William Davis Courthouse on Hurontario, named after the former premier and his father, a long time crown attorney. The old county buildings are now part of the Peel Art Gallery, Museum and Archives complex.

In 1873, twenty years after Brampton became a village and with the promise of another rail line running through it, Brampton was reincorporated as a town. Just over 100 years later, in 1974, Brampton became a city through a merger of the town of Brampton with the townships of Chinguacousy (including the newly developed satellite city of Bramalea) and Toronto Gore as well as parts of Mississauga. In that same year, the county of Peel became the region of Peel, including within it the cities of Brampton and Mississauga and the town of Caledon.

Where in all of this was Jesse Perry, the renowned 19th century Brampton contractor? The man who inspired the character Jesse Brady in my Beneath the Alders series? You will have to read The Mending to find out. 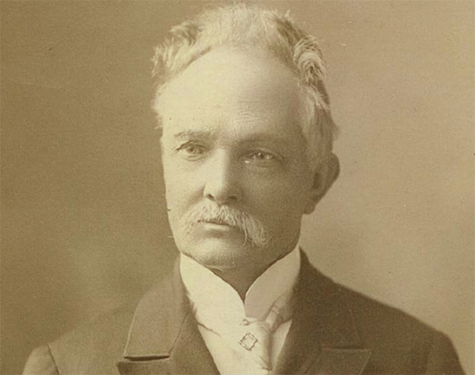