While I did all of the initial research for my Beneath the Alders series and for the first book in the series, The Innocent, I was greatly assisted in completing The Beleaguered and The Mending by the research skills of my good friend Colleen Mahoney, a pre-maturely retired librarian. For this newsletter, I asked Colleen questions about fashion trends in the Beneath the Alders Years.

Lynne: What can you tell us about what men and women were wearing in the 1920s –the days featured in The Mending?

Colleen: When we think about the 1920s, we often think about the Roaring Twenties and “flappers”, but there was a great deal more to fashion than revealing, shimmery dresses for women and sleek three-piece suits for men.

The styles of clothing seen in the ‘20s were very much influenced by a lobby, which began in the 1880s, that advocated for less restrictive garments which offered more comfort and ease of movement.

Lynne: What were women wearing in the prior period? In the 1880s say?

Colleen: Women were thoroughly trussed up well into the Victorian Era (1839 – 1901). Their attire typically consisted of corsets, stays, petticoats, bustles, heavy skirts, long sleeves, and tight collars. The undergarments alone could weigh up to 14 pounds. Donning her daily attire was a laborious task for any woman, often requiring the aid of a second person!

The reason for all the layering of clothing was two-fold: first to “radiate womanhood” and secondly, to do so in an extremely modest way.

Projecting an image of womanly perfection, no matter the woman’s natural size and shape was achieved with the use of corsets and stays. If a woman didn’t have much of a waist or bosom, not to worry, the corset and stays would cinch her in at the waist and raise the bosom. The resulting perfect hour-glass shape was said to radiate womanhood.

Collars were high, sleeves were long (and often very puffed) and skirts practically swept the floor. As you can imagine, there was not a lot of skin showing. The less skin that was revealed, the more modest the woman was considered to be. Modesty and propriety were the watchwords of the Victorian Era.

Lynne: When did this change and why?

Colleen: The first noticeable loosening of mores around clothing came in the late 1800s when women increasingly began to participate in sports including golf, tennis, croquet, mountaineering, trekking and biking. In fact, improvements in, and the relative affordability of, bicycles caused their popularity to explode, both as a practical means of transportation and also usage purely for pleasure. For women who led relatively restrictive lives, the bike screamed freedom.

Can you imagine trying to do any type of sport while dressed in the Victorian clothing described above? I couldn’t and neither could the Viscountess Harberton, otherwise known as Florence Wallace Pomeroy, the founder of the Short Skirts Society. An avid cyclist, she found the traditional long skirts a hazard when biking. The Society advocated for shortening skirts to five inches above the ground and/or a divided skirt or baggy pantaloons covered by a shorter skirt, when women were biking or participating in sport.

A few years later, in the 1880s, Florence enlisted the support of a group of London society women to establish The Rational Dress Society. The Society went well beyond advocating for shorter skirts while participating in sport. It issued a “manifesto” which read:

The Rational Dress Society protests against the introduction of any fashion in dress that either deforms the figure, impedes the movements of the body, or in any way tends to injure the health. It protests against the wearing of tightly-fitting corsets; of high-heeled shoes; of heavily-weighted skirts, as rendering healthy exercise almost impossible; and of all tie down cloaks or other garments impeding on the movements of the arms. It protests against crinolines or crinolettes of any kind as ugly and deforming….[It] requires all to be dressed healthily, comfortably, and beautifully, to seek what conduces to birth, comfort and beauty in our dress as a duty to ourselves and each other.

In addition, the Society developed the following requirements for the perfect dress for the modern women:

1. Freedom of movement
2. Absence of pressure over any part of the body
3. Not more weight than is necessary for warmth, and both weight and warmth evenly distributed
4. Grace and beauty combined with comfort and convenience
5. Not departing too conspicuously from the ordinary dress

The last item indicates that, although the Society was all for clothing that allowed women to move freely and be comfortable, its members did not want to upset the Victoria apple cart too much. And while there was a lot of support for their ideas, especially among younger women, there was in fact a fair bit of opposition as well. Many in the British public feared that the loosening of clothing would in turn lead to the loosening of moral values.

And in fact, while out cycling one day in a divided skirt, Lady Harberton was turned away from a pub for “improper dress”. She sued the pub. Though she was unsuccessful in her claim, she created a great deal of publicity for the Society.

Seeking not to offend the British public (and to be rewarded with a pint at the end of a long ride), instead of divided skirts, most female cyclists of the time opted for a slightly shortened skirt with a deep pleat at the back that allowed for unrestricted movement, as shown below.

The Society was serious about its mission though, publishing quarterly gazettes in 1888 and 1889 and sponsoring a number of exhibitions. One member crashed a meeting of the British Association for the Advancement of Science to discuss the health benefits of new clothing designs.

Lynne: Interesting. Now, what about the men?

Colleen: While the Rational Dress Society focussed most of their efforts on women, they were not oblivious to the plight of men. Again, they encouraged comfort by advocating lighter-weight, relaxed clothing. The sack suit, (what a name), a single -breasted jacket without a waist seam first became popular with the working-class man and then made its way to the upper classes for day wear. Sportswear became popular, particularly stripped flannel suits with boater hats. (See below.) Formal wear was still de rigueur for evenings.

Lynne: So that’s the 1800s covered off. What about the early 20th century? What were people wearing?

Colleen: Not a lot changed in early 20th century. Women continued to wear long-sleeved blousy tops with lots of ornamentation and long heavy skirts and of course, cinched it all in with a corset. The exception to this was evening dresses which often featured short sleeves and low necklines. However, modesty and femininity still ruled the fashion pages for the most part.

When WW1 began in 1914, fashion took a dramatic turn. Clothing became utilitarian – trousers or coveralls for women who worked in the armaments industry or on farms and factories, and tunics over simple dresses for those who worked at home. Skirts were shortened to save on fabric, and colours were muted to reflect the seriousness of the times.

When the war ended in 1918 and people began to recover from the trauma of their losses, clothing began to reflect an optimism for the future. Colour reappeared, corsets disappeared, dresses were looser and waist lines began to drop or disappear altogether as hemlines rose. What we know as the flapper or chemise dress – straight-cut and shorter - began to appear. In fact, one source noted that,

Both waistlines and hemlines followed similar, though inverse, projections throughout the decade, waistlines dropped until 1923 before beginning to rise again in 1928; while hemlines rose until 1926, when they started to fall again.

In addition, sportswear was seen as suitable clothing for everyday activities. For instance, tennis-wear inspired sweater and skirt sets became popular. The photo below illustrates a tennis inspired day set. Not exactly what we consider sportswear today!

Lynne: Interesting. I’ve seen photos of my Aunt Jessie Roberts (the inspiration of the Beneath the Alders book series) and her family wearing clothing as you’ve described. In fact, Jessie’s Vic hockey uniform looks remarkably similar to Lady Harberton’s bicycling skirt. (See below.) 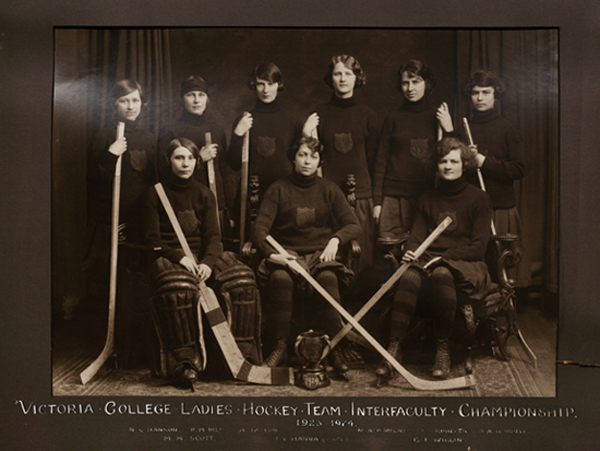